Album at a glance: Toward Space – Gently With A Chainsaw 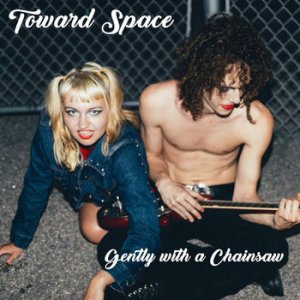 Toward Space is a loose and erratic band that specializes in bluesy romps that stay energetic and unpredictable. The playful sound of this bare bones rock band is closest to punk but you can clearly her the blues backbone on many songs.

Vocalists Seyla Hossaini and David Patton split duties throughout the album creating more of a divide in the songs, this probably prevents any hint of monotony. With the emotional delivery and lively band performances it is far from boring though. It is reminiscent of the Jay Retard singles years as the band plugs and plays on songs like “NERVE” where the erratic music barely stays in check. On the brilliantly titled “Nosferattitude” the band really lets loose with some fuzz rock jams. On the slightly down tempo “Neon Signs” Hossaini delivers some ghostly vocals as the band speed shifts through the song at times locking in to some good grooves.

“Gently With A Chainsaw” is aptly titled as there is little gentle about this, it should be filed more closely under aggression and tension. If you’re looking for some erratic underground punk or garage rock, look no further.