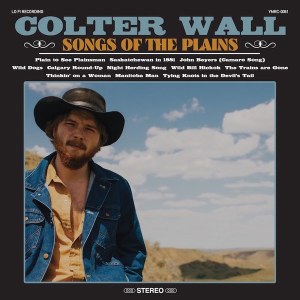 Colter Wall’s pleasing baritone is so soothing and rich it almost feels like an act. This album is filled with vintage cowboy songs from america’s neighbor to the north and the entire album relies heavily on Wall’s vocals alone, finding itself in many acapella moments.

Even though you may question how real these songs are, they pass the ear test; they seem honest and true and the stories are entrancing. The obvious comparison is Mr. Johnny Cash vocally and it isn’t that far off. The subject matter is a little more based in the middle of nowhere geographically but that comparison rings true. On the opener “Plain To See Plainsman” you get ushered into Wall’s world right away and will be captivated to stay until the end of the album to see what he has to say. “Saskatchewan In 1881” is, like all these songs, in such tight character that it is almost hard to believe. This album plays like a well written movie of collected short stories of the pastures on Canada. On the acapella “Wild Dogs” Wall’s voice vibrates to the point of almost being chilling while on “John Beyers (Camaro Song)” you’ll be left dying to see or hear what happens next. He gives just enough information to allow the listener to paint the picture but what happens off screen is up to us.

This powerful true folk western album is fiercely unique. It’s hard to categorize and recon with so it’s probably best if you just sit back and listen. Whether this music is in your wheelhouse or not you really need to hear this album.