Posted on December 8, 2011 by VocalsOnTop 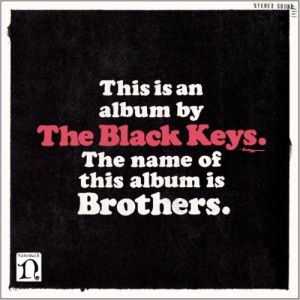 Some records dominate their time and genre. The great albums in history do, they work as a microcosm of what was working at that time. This is a good way to look at The Black Keys album Brothers.

From the first line of “Everlasting Light” you can tell the album sticks out from any other album by the band. Dan Auerbach improves his singing for the record and definitely stretches what he can do with his own voice right away on the opening track. The band is in more familiar territory with their biggest hit from the record “Tighten Up”

“Tighten Up” is a great example of what the Black Keys do well. It has great guitar licks and is a catchy song without having a big sing-along part as the band usually doesn’t have. A good music video helped them into heavy rotation with the song and it is now going to be a staple of their shows for years to come. The best song on the record is the very bluesy “Howlin’ For You.” To this point in their careers it was probably the best song the band have ever written.

All these songs are aided more by bass and keyboards than ever before too. This gave the band the flexibility to add more a punch to their music and they really knew how to take advantage of it. The album has great tracks hidden deep in the album as well like “Sinister Kid” and the Grammy nominated instrumental “Black Mud.” The album runs long but never stops giving the whole way through.

Key Tracks: “Tighten Up” “Howlin’ For You” “Sinister Kid” “Next Girl”