In a surprisingly low turnout, St. Joseph, Missouri’s smoking ban passed by a landslide. The vote, originally scheduled for April 8th, was moved up a week in a City Council meeting on March 25th. Originally the bill had a 60 period before it went into effect but the verbiage was altered at the same meeting causing the ban to take effect immediately. Despite strong opposition to the ban it received nearly 80% of the votes cast on the March 31st election.

The effect of the ban were seen immediately as well. Already two local bars have contacted real estate agents to lease out their buildings. One has already shut down entirely and directly blames the smoking ban for the steep decline in business. The former bar owner, who wishes to remain anonymous, said, “Those fucking soccer moms have won again! I can’t believe how stupid this town is, first they pay nearly $5 for a beer they can buy across the street for a quarter of that price here, and now they ban the best thing about my bar.” The bar owner also mentioned that he was too busy running his bar to go vote and claimed, “his vote didn’t matter.” 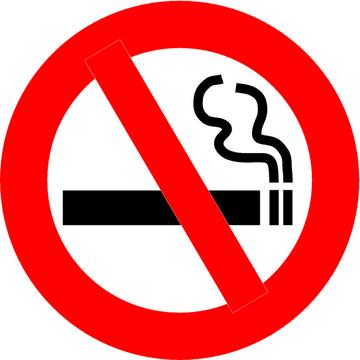 We interviewed Gloria “Peaches” Wilson at the South Presbyterian Church polling station and she said she was glad the measure passed. “I think all those young drunks were out too late the night before drinking alcohol and smoking their cigarettes to get out to vote. I don’t go to bars anymore but I don’t want a cigarette within a mile of any one of them.”

More than just bars and taverns are feeling the crunch too. Three local bands announced on their facebook pages that they had played their last show. “Some bands are in it for the music and artistic expression, I say fuck that, I wanna smoke some cigs bro.” one band’s lead guitarist said. He would add, “I don’t smoke in my house because I don’t want my wife and kids to breathe the nasty air, but a bar? Yeah, I don’t give a fuck about those people.” The other two bands simply stated that nobody would ever go to bars again to see music because they weren’t there for that. One band would even say that he anticipated that every bar in town but one or two would go under within a month.

Two local cigarette shops already have closed, the owners have skipped out on their leases and fled the country. The unemployment rate is expected to spike in the coming weeks because of the lost revenue from cigarette smokers as well. Not all aspects of the economy in St. Joseph are suffering though; St. Joe Frontier Casino has done record business since the ban went into effect as it was exempted from the controversial ban. Bill Connors, a local smoker, claims to have waited over 45 minutes just to get inside the casino doors. “I need one (a cigarette) so bad I thought I was going to pass out right there in line. I am a card carrying member of Gambler’s Anonymous so I don’t go to casinos anymore but I had no choice.” Connors said. “I went in for a smoke and ended up losing my 12 year old daughter’s college fund. It’s not my fault, if I could just smoke in bars little Suzie could’ve went to college and cured lung cancer, then smoking wouldn’t matter anymore. This is all because of that damn ban.” When Connors was asked which poll he voted at he declined to comment on the subject.

With Casino revenue soaring luxury cars are at a shortage in town. Several local politicians in the area have recently purchased the same luxury cars. “It is easy to pay a little more for a car with the success of the casino,” one councilman would comment, “with the casino kickbacks going in my pocket I was approved for any sized loan that I wanted they said at the dealership. I took the 20% interest rate from the lot too, I figured I would easily stay ahead of that now that the ban has passed.”

Smokers are still the losers here though. Some smokers have even resorted to smoking in their own houses! Most previously never have done that as it makes all your things smell bad and get discolored. Local smoker Sandra Littleton is one of these smokers who have sunk to these measures. “I have to smoke in the house now” she says “I never did before because my sister died back in 1995 from second hand smoke inhalation and I took it really hard and still blame her husband for it. I need to smoke and I think my husband and three kids will be fine because there are four of them breathing the smoke instead of just one like in my sister’s case. I’m not worried about them, I’m sure they will be fine. I need to smoke and it is okay to be a little selfish every now and then right?”

The long-term effect have yet to be seen but several people are upset about the ban. Many are expected to never go to bars again because they only went to smoke. Similar cities have experienced hot spots of economic recession because of this. It is obvious smoking is the linchpin to the economy. Look for violence to rise, the economy to crash and everybody to not have to breathe toxic smoke in the months to come.

This is of course all rubbish. It is another Vocals On Top April Fools article meant to be a bit of a satire of the extreme fear of smokers everywhere. The vote is April 8th and I encourage everyone to vote whether you are filling in the top circle or the bottom circle, just vote.

Now some real thoughts on the smoking ban in bullet form so they are easy to browse: