250 word album review: The Decemberists – I’ll Be Your Girl 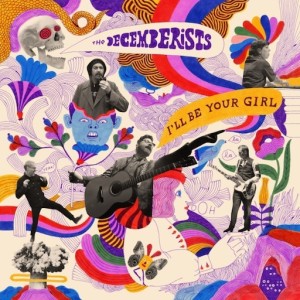 If you’re reading this you probably know what The Decemberists are all about, they have a well established catalog defining the band which makes an album like this challenging. Once you define yourselves as a band you spend the rest of your days trying to prove that ISN’T you; The Decemberists have found themselves in this phase of their career.

Their last album “What A Terrible World, What A Beautiful World” was their most disappointing since their breakthrough “Picaresque.” The record sounded like a K-Tel version of Fleetwood Mac and felt flat. They have done wonders to recover those feelings here though, “I’ll Be Your Girl” incorporates some fresh sounds, just see the heavy duty synth on “Severed.” That song has all the pop sensibilities that make the band great along with the leadoff track “Once In My Life.” Like all Decemberists records it has an incredibly dark tone flowing beneath the surface, the song titles alone on “Sucker’s Prayer” “Everything Is Awful” and “We All Die Young” attest to this. All of those tunes are masked with a not so dark sound though, the same can’t really be said of the lead single “Severed” though. The children sing-along on “We All Die Young” is irresistible and the astoundingly bouncy “Everything Is Awful” is so infectious it’s hard to ignore.

The good news is The Decemberists sound fresh again, the band’s music doesn’t suffer a huge shift but it is just enough to keep you crawling back for repeated listens.

Key Tracks: “Everything Is Awful” “Severed” “Once In My Life”

1 Response to 250 word album review: The Decemberists – I’ll Be Your Girl