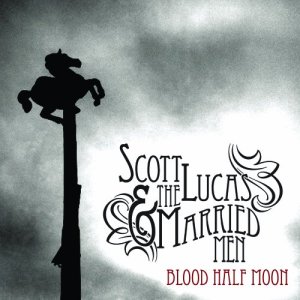 Scott Lucas & the Married Men’s second full length album is not too similar to either Lucas’ other band Local H or the Married Men’s first album. Blood Half Moon is a whole new animal that is somewhere in the middle but stands alone musically.

The wall of sound is less than that of Local H but the aggressiveness is undoubtedly turned up from the Married Men’s first record George Lassos the Moon. Scott Lucas has found a way to make the Married Men’s same driven focused songs contain more guitar fuzz and a harder sound this time around. The record seems slightly more loose than the band’s debut but the songs are still very strong.

The sounds on this album are just bigger. At no point on the first record does the band get as loose and Rolling Stonesy as they do on songs like “Steady Gaze.” There are songs that fit well with the tracks on the last record like “Out of the Boat” and the infectious “Blood Half Moons.”

The standouts on the record is the gentle touch of “Blood Half Moons” and the band’s take on the traditional tune “There Ain’t No Grave” featuring a build up of momentum and screeching violin. In many ways the whole album leads up to “There Ain’t No Grave” as it is the album’s eight minute closing track. It is refreshing to see an artist like Lucas take a “side project” in a whole different direction like this. The band already has a track record of quality songs completely all their own.