The Old 97’s may be the best live band in the world. Their consistency and enthusiasm is unparalleled among modern bands. Rhett Miller is one of the most charismatic and lively frontmen you will ever see. For their Too Far To Care 15 year anniversary tour they signed on Those Darlins as an opening act and Rhett himself would do a solo acoustic set to start things off. The tour drew near to a close on this Tuesday night at the Slowdown in Omaha, Nebraska on September 11th, 2012. 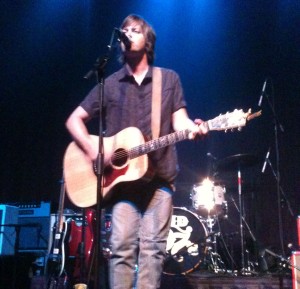 Rhett Miller performs his solo set at The Slowdown in Omaha, NE on 9/11/12.

Rhett Miller would quietly walk onto stage at 9:00 sharp to start a stretch of over 3 hours of music for the night. He would immediately introduce himself and allude to how he knew the band leading him to landing the opening slot he was about to play. Miller just released his forth solo record so he has amassed an impressive catalog even away from the Old 97’s. The crowd was small for Rhett Miller so early in the evening, Omaha tends to traditionally have a very late crowd to get to shows so openers often play to much smaller audiences there.

He would blast through a quick about 25 minute set that covered 6 songs and featured only three songs from his solo releases. He would appropriately bust out a b-side from the record being celebrated on the night, Too Far To Care, with the song “Holy Cross” and do two covers.

He would play two songs from his new solo record The Dreamer and a solo version of a duet he did with Rachael Yamagata. He shockingly (and ambitiously) took on Wilco’s classic song “California Stars” which was unfortunately marred by sound issues. He would end his short solo set with a ferocious reading of Johnny Cash’s “Wreck of the Old 97” for which the headlining band on the night took its name. He would tease the crowd with the fact that he might see them again before the night was finished. 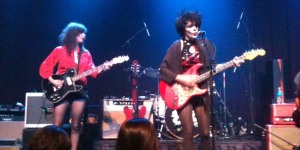 Those Darlins would storm the stage missing one Darlin. Apparently Kelley Darlin had chose to leave the band and was replaced by a new bass player. The core members Jessi Darlin and Nikki Darlin were still present and didn’t hesitate to put on a great show along with drummer Linwood Regensberg. The girls in the band would come out in short shorts and provocative outfits as is usual for them. Jessi would sport a tight, sparkling dress while Nikki would go with a loose fitting red button up shirt with most of the buttons going unused.

The would shockingly start their set with one of their slowest (and best) songs in “Waste Away.” They would hit the album that features that song, Screws Get Loose, very hard in the set along with a few new tracks. They would also play both sides of The Nightjogger 45 by playing “Nightjogger” and “Funstix Party” back-to-back.

“Nightjogger” is always a highlight of their live set with its power riffs and “Funstix Party” is a goof jam filled with clever sexual references and some not so clever (“I’ll bring the pussy, you bring the dicks…”) They would show their confidence that they haven’t showed in the past during this song as well by jamming out quite a bit. Their several new songs were highlighted by Nikki’s new song “In The Wilderness” showing the band’s new direction. Their first album had many country sounding songs and Screws Get Loose featured much more of an indie rock sound and the band has continued to move toward the harder sound on the new material.

NIkki would jokingly accuse Jessi of writing one of the bands most popular songs “Red Light Love” about Rhett Miller before tearing into song. Old 97’s guitarist Ken Bethea would come out to contribute to a three guitar attack for the final song, a new track that rocked as hard as anything the band has ever done. 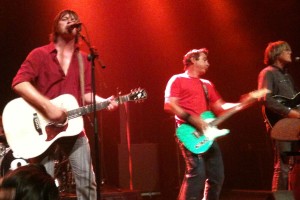 The Old 97’s perform their set at The Slowdown in Omaha, NE on 9/11/12. Left to right: Rhett Miller, Ken Bethea and Murry Hammond.

The Old 97’s would come out to a fair sized crowd, it was a Tuesday night but I fully expected a larger crowd for the band and was a little disappointed in the number of people there. The audience however was very enthusiastic and the band continued to play like fans were hanging from the raptors.

The Slowdown always has great sound for bands. The bands almost always comment on how they like the venue as well. The show setup was great for the bands on this night too, Those Darlins used The Old 97’s drum set so there was very little time in between sets and this proved for a fast paced evening of music without any of the usual long waits in between bands.

The Old 97’s would start with their entire 1997 album Too Far To Care in order. The record features many songs the band plays at every show anyway like “Timebomb” “Barrier Reef” “Niteclub” “W. TX Teardrops” and “Four Leaf Clover” among others. The album is where the band really found their sound and has stood up as a great record for many years now. Jessi Darlin would hesitantly come join the band for the album’s final song “Four Leaf Clover.”

The album would only compose half of the night’s songs. They would also play another 13 favorites from other records. Ken Bethea (The Old 97’s secret weapon) would even get his chance to shine on a song Rhett would scoff at “doesn’t have any vocals” to which Ken would remark that the “real talent” could then shine on the instrumental song “Marquita.”

The highlights of the second half of the set would prove to be the songs that preceeded the encore in the back-to-back performances of “Every Night Is Friday Night (Without You)” and the fantastic “I’m A Trainwreck.” The encore would feature Murry breaking out “Valentine” and Rhett then singing “Rollerskate Skinny” from the underrated album Satellite Rides. The band would then very appropriately close the evening the way their set began, with the first track from Too Far To Care, “Timebomb” which normally serves as the band’s closing song anyway. 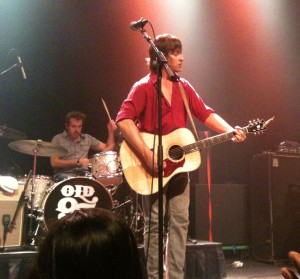 The Old 97’s perform their set at The Slowdown in Omaha, NE on 9/11/12. Philip Peeples on drums and lead singer Rhett Miller pictured.