Posted on January 1, 2014 by VocalsOnTop

Heading in to 2013 a silent resolution was made to jump in the fire and see as many concerts as possible, the end result being a total of 314 bands. It’s not something I would recommend but it is one way to live and for one year I lived it. Way too many nights strolling in the front door at 1 am knowing that the alarm was already set for about 6:11 am. The high cost of living this way also can’t be discounted, putting a measly $5 in a tip bucket really adds up and with the addition of one or two spirituous beverages it is debatable whether this was a good idea in the first place.

Fiduciary responsibilities aside; it was a ton of fun. I saw performances that really blew me away, I saw tons of people throw their heart on the stage and slowly watch a drunk crowd, paying attention about half the time decide whether or not the show was worth giving a shit about. Many bands weren’t that good, many good bands had bad shows and some bad bands had bad shows and made me wonder what the hell I was doing there. So in 2014 I won’t be doing this again but I will always have 2013 to look back at. Here are some of my favorite shows from that epic year.

Side note: This list was originally a Top 5 then became a Top 10 then I decided “What the Hell?” and made it a Top 15. All my lists start at #1, I don’t know why people start at #10. If people only see one item from my list I want it to be the best one…

Lucero’s Ben Nichols: All Sewn Up with bad tattoos and one hell of a nice guy.

I really didn’t realize how good Lucero was going into this night. They came out and lead singer Ben Nichols won over each member of the crowd, seemingly one by one. It was honest, sincere and unscripted. Nichols proved to me he may be one of the best songwriters of the last couple decades. Langhorne Slim would open and have an enthusiastic set which included a victory lap by the lead singer through the audience before their set came to a close.

Nashville, Tennessee band Megajoos do some head banging during their high-intensity show at The First Ward in St. Joseph, Missouri on 7/12/13.

The Megajoos wore masks and played their unique brand of tongue-in-cheek hard rock with only a bass and drum set. Jerkface riled the crowd up properly before them and had a great set of twangy-Cali-surf-ska. Third Wounded Man started things off with a blistering set including partial covers of The Misfits and Operation Ivy. The show had a special energy that can’t be explained except for saying the right combination of bands and the crowd were all right where they should have been.

Andy Grooms organized this unique even with fellow songwriters to all display just how strong of writers they all are. The evening was almost exclusively original material highlighted by hearing Colby Walter’s originals, Michael Coman’s supreme songwriting, Ausin Marks stripping Eyelit songs down to their core and of course Andy Grooms’ unusual take on piano accompanied songs. It would be the only show I’d see at Bad Art Bistro all year, they should clearly have more shows.

A couple times a year Colby Walter skillfully takes on a night of all Bob Dylan covers and this was likely the best of the 3 or 4 times he did it in 2013. Dylan is hands down my favorite songwriter so to hear a musical chameleon like Walter fill the role of Dylan for the night is a must-see for me. Coincidentally falling on my birthday it would prove to be likely my best birthday in about a decade.

An unusual venue for bands is always interesting. The GasTown Lamps and Dsoedean would take on the outdoor patio/loft at Norty’s for what seemed to be a predominatly normal show. Then the rains came near the end of The GasTown Lamps set and everyone huddled under to small awning and a normal show became great. So great infact that GTL would re-play half of their set to take advantage of the renewed energy. It would be GTL’s last show as a three piece band. 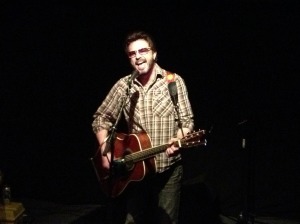 Ed Anderson and Johnny Hickman perform live at The Rye Room in Lincoln, Nebraska on 3/11/13.

Johnny Hickman is the guitarist for my favorite band Cracker so this show was a given, even though it meant eating a $40 ticket to see the Alabama Shakes because of a snowstorm in Denver. The short tour run for Hickman and Backyard Tire Fire’s Ed Anderson was scheduled with a small opening on this day and I prompted them to add a date in Lincoln/Omaha/Kansas City/Lawrence and to my surprise they obliged. The scantly attended event was a thrill for me and any time Mr. Hickman comes around again, expect me to cancel any and all plans on that day as well.

Universe Contest perfoming live at the Rendezvous in St. Joseph, MO on 3/22/13.

Nebraska’s Universe Contest took the stage with an elaborate stage setup complete with endless electronics and smoke machines. Their intense set at times you couldn’t see through the bellowing smoke. Cupcake was a very appropriate opener on the night and the unfortunate task of following the over-the-top Universe Contest stage show belonged to Scruffy & The Janitors. They dutifully filled the role but it was clear that Universe Contest had stolen the best moments of the show.

How could this not be on my list? Jeff Tweedy is one of the most influential songwriters on my musical tastes and he bared his sole, standing solo with an acoustic guitar on the stage of the nearly sold out Uptown in Kansas City and did not disappoint. He would touch on Uncle Tupelo, Loose Fur and Golden Smog songs and of course a heavy dose of Wilco tunes to delight me and everyone else in the theater.

Missouri Homegrown playing live at The Lucky Tiger in St. Joseph, MO on 4/6/13.

The Lucky Tiger vintage store put on in-store concerts on the first Saturday of each month and while many of them would be very good, this one was likely my favorite. Three full bands playing electric and Matthew Coman taking a solo acoustic approach it proved to be a great way to spend a Saturday afternoon. I also believe this was the first show that Missouri Homegrown featured three electric guitars.

Dsoedean busting through their opening set at Cafe Acoustic on 4/13/13. Left to right: Colby Walter, Bobby Floyd and Zale Bledsoe.

For Brian Myers birthday party The Cafe Acoustic scheduled three great bands to be noisy. With Myers heads-on-sticks with random facts on the back of them it was a unique evening to say the least. It would happen to be my first time seeing Third Wounded Man who would quickly rise to become one of my favorite live bands in St. Joe. Marc Darnell makes every Cupcake show interesting and Dsoedean simply did what Dsoedean does, a great combination of bands.

This list was originally only 10 but what the hell? It was a great year… here are numbers 11-15:

A touring punk band from the East Bay signed to Fat Wreck Chords visited Cafe on an off day from their major nationwide tour and it was the highest intensity of any show I attended this year in St. Joe, even though it was on a Monday. The band had some connections to St. Joe bands The Sticky Throttles and Burnstyles so they opened but it was pandemonium when Get Dead played. Moshing, jumping on stage, grabbing the singer by the collar all occurred during the set, I would expect nothing less if they ever came back.

Rancid brings their 21 years of stage experience to The Granada in Lawrence, KS on 9/21/13.

Rancid has been my favorite punk band for over a decade so finally getting to see them live was awesome. The played a greatest hits-type set with everything you’d expect included. Rancid member Tim Armstrong would open with his side project Tim Timebomb and play a collection of covers and a few originals including a cover over Operation Ivy’s “Sound System.”

Dsoedean’s Continue To Move album release party was everything it was expected to be. Advance tickets were sold and everyone got either a CD of the album or a clear 7″ single of two of the songs. Cupcake would be weird as always in opening the show and Scruffy & The Janitors would follow with one of their best sets of the year. Dsoedean would play their new album straight through (as every band should at the release party) and it would be a true celebration of St. Joseph music. 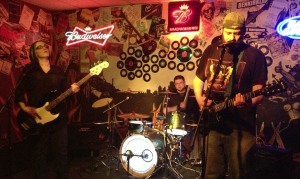 The Ramey Memo played their farewell show at one of their most frequently played venues, The Rendezvous and officially welcome in the age of Two Piece Animator. Local rapper and YouTube sensation Verbal was set to play but not-surprisingly ended up behind bars and Matthew Coman would fill in and pay homage to the incarcerated rapper by doing a cover of his “hit” song “Reppin’ 816.” 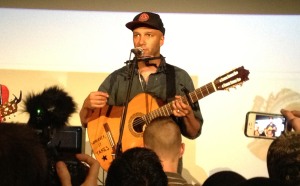 Tom Morello performs some acoustic songs in the Alamo Draft Movie Theater at a benefit for Tomas Young.

This was undoubtedly the most unique show of the year. It took place in a movie theater where I sat just a couple rows in front of the legendary guitarist for Rage Against The Machine, Phil Donahue and one of my favorite musicians Ike Reilly. Reilly would travel from Chicago to play just one song before the Body of War documentary would play. The wounded warrior who was the subject of Body of War would even join via video chat and an emotional set by Tom Morello The Nightwatchman would end with his singing with tears in his eyes.